You can reach up to clan level  51 (max level) but for that, you have to make and follow strategies. Deploying good strategies can make your journey to level 20 quick and easy.

Since Clan XP is the major factor in moving to the next clan level therefore we will discuss here how you can earn maximum XP in one clan war. You will also learn how much XP do you get in 50×50 clan war.

Improving your clan level can push your in-game progress too. How?

Well, you will unlock several clan perks that are beneficial to all the members of the clan. This is the reason why people always choose active clans.

If you are at a smaller town hall level who wants to upgrade to the next TH then these perks can help you in getting more loot in lesser time.

How Much Clan XP Do you Get? 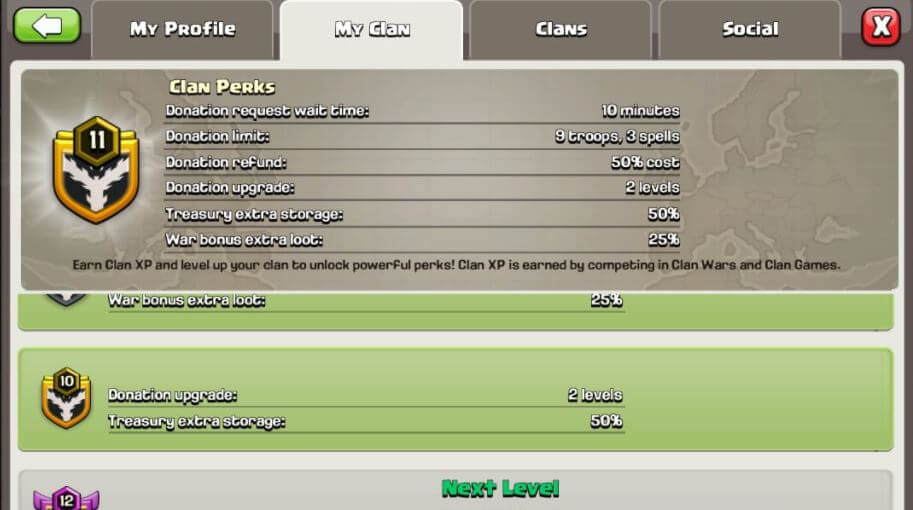 It might come as a surprise to many that not all players get equal XP from a clan war. You might get a different XP as compared to your clan member even if you scored the same stars in the war.

The algorithm based on TH level distributes the Clan XP. The lower your Townhall level the lower XP you will get.

Please note that to receive XP corresponding to your town hall level you must have upgraded the TH base. You can upgrade to next town hall quickly by using builder potions.

For example, if you are at TH 9 but it is not maxed out then you will get Clan XP corresponding to TH 8.

This is the reason why you should not rush in Clash of Clans. Always max out your base and then only move to the next town hall.

Another factor in calculating Clan XP is the war score. You have to score at least 1 star to earn clan XP.

If you scored a star against upper town hall then you will get more XP.

If you score a star against a town hall lower than you then you will get a smaller XP.

But this does not mean that you go and attack the first ranking town hall on the map. Remember that you will score maximum XP only if your clan wins the war.

That is why you have played as a team instead of as an individual.

How Much XP Do you Get If you Win War?

How's your Clan doing in this round of Clan War Leagues? pic.twitter.com/KaEj5xVoY1

The formula to calculate the winning XP is simple. Multiply the total number of war players with 3 (stars). This is the maximum number of stars that you can earn in the war.

Now if you win 40% of these maximum stars then your clan will earn 10 XP.

If you win the war then you get a bonus of 50 XP. In order to win the war you have to score more stars then opponents. But people only focus on this they forget that with a great base design they can stop opponent from getting 3 stars thereby limiting their chance of winning.

Based on this formula we can calculate the total points of clan XP for each war combination.

War Winning Clans can win a maximum of 205 XP Points.

How to Level up Clan in Clash of Clans

To speed up your clan progress you need to play regular wars. Don’t forget to participate in Clan war leagues which give a chance to play 7 wars in 7 days. This way you can earn maximum XP in the shortest amount of time.

You can read the complete list of clan perks and check chart here.