Builder hall 3 attack guide gets interesting because we have two exciting troops unlocked at this level. Upgrade your Barracks immediately to unlock Boxer Giant and Beta Minion.

These two troops can improve your winning ratio significantly. But using them wisely in a perfect army composition is not everyone’s cup of tea.

If you want to win every day’s versus loot bonus then you need to create an undefeatable army. At Builder Hall 3 you will be mostly matched with the same BH players.

However, sometimes algorithm matches you with higher builder halls. The beauty of versus battles is that you can change your army composition during the preparation time.

If you are matched with builder hall 4 that has a high-level crusher then you need to have a beta minion in your army. Sneaky archers can do the job too but they will attract other defenses like double cannon and archer tower.

If you are matched with the same builder hall then you can three-star it by using any of the following army compositions.

At Builder hall 3 you have 3 army camps unlocked. However, unlike town hall, you can not upgrade your army camps to increase its troop holding capacity.

You have to upgrade your troops in the laboratory so that your unit per camp increases too.

At Builder hall 3 you have 4 troops – Raged Barbarians, Sneaky Archer, Boxer giants, and Beta Minion. Here are stats of each troop 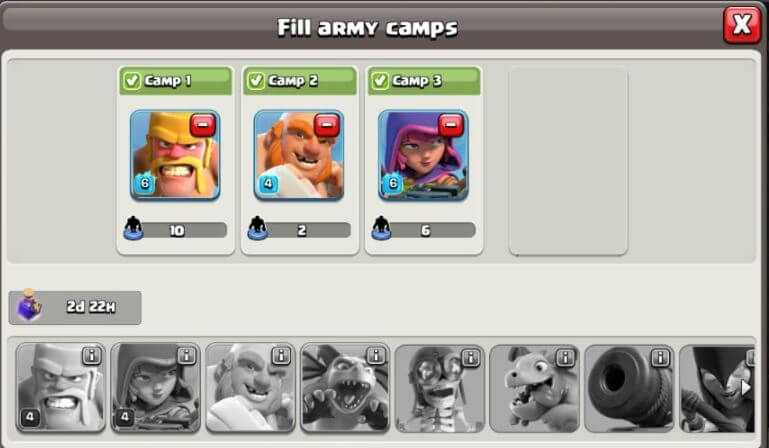 In Builder Hall, 3 Attack Strategy Raged Barbarians can play a vital role. Their rage duration stays the same (4 seconds) at this builder hall level but the number of units per camp increases to 10.

Sneaky archers upgrade to level 6 at this builder hall and their cloak duration increases to 5 seconds.

You would love to use boxer giants in builder hall 3 attacks. They are not humble like their town hall counterparts. Boxer giant’s special ability is Power punch.

A Level 4 Boxer Giant delivers a power punch of 200 damage. Although we can have only 2 units per camp if used wisely they can overkill the opponent base in builder hall 3 attacks.

Beta Minion has a love-hate relationship with clashers. Most clashers do not like its low HP but all adore its special ability of long shot.

A Level 4 Beta Minion will strike 3 long shots with a DPS of 44.

So you have these 4 troop units available for builder hall 3 attacks.

Yes BARCH is still feasible at Builder Hall 3. It can destroy any open or semi-open base even if there is a crusher. Use this army on open bases.

You have to deploy 1 barbarian at a time to trigger hidden mines and traps. After this deploy barbarian in a group of 3 to cannon and double cannon. Use sneaky archer to destroy crusher.

We do not recommend a giant barbarian army at Builder Hall 3. This is because a crusher can easily take the whole army out.

A Clever workaround is to have a Giant archer army combo. Your 6 archers will take down the crusher while the other 6 will help giants in wiping out the rest of the base.

This attack is successful if each unit dutifully completes its given tasks. The Boxer Giants have the task to take down the archer tower whereas the Beta Minions are appointed to take down the crusher.

The Beta minions can also help giants in taking down archer tower. You have to use one beta minion at a time while attacking crusher. This is because if there is any hidden mine then it won’t affect the whole group.

This is my favorite army for builder hall 3 attacks. I have hardly faced any base that didn’t give up three stars.

One issue with previous armies is that there is a hidden tesla that can kill minions, barbarians, and archers. The giants might survive but they would be too slow to take down the whole base.

This perfect army can overcome that issue. You have to deploy the army in groups.

Attack with one giant, 3 barbarians and 2 sneaky archers from one side and the same group from the other side.

Use your remaining archers to take down the crusher. You do not have to deploy your giants and barbarians in front of the crusher. Only your sneaky archer can take it down without getting any collateral damage.

If deployed properly you will easily score three stars on any builder hall 3 bases.