A Builder hall 2 base design is not very complicated. There are very few buildings. If you have checked out our home village base designs then you already know that we prefer to use non-defense buildings are path blockers.

Here we will share with you the best builder hall 2 bases. You unlock builder hall 2 as soon as you wake the master-builder up. The ruins of the base were supposedly level 1 of builder hall.

So in a way you never get to play builder hall level 1. When your builder hall is automatically upgraded to level two your broken cannon and star laboratory also get updated.

You will see that you have one gem mine and one elixir collector at Builder Hall 2. However, unlike Town hall, you do not have storage available at this level.

One pro tip that you should remember for builder hall is that a building’s tile size matters a lot while designing the base. You can use buildings with a 5×5 tile range in your favor.

Another important upgrade that supercell made in the clash of clans builder base is that you can not remove obstacles until builder hall 3. This means that you have to design your builder hall 2 around these obstacles.

To design a builder hall 2 bases you must understand what kind of attacks you are going to face.

Most of the attacks will be from Builder hall 2 players. Now at this level, only two troops are available for army composition – Raged Barbarians and Sneaky Archers.

Raged barbarians cannot attack buildings behind walls. Even though you cannot place all your buildings inside wall structures (too few walls) but still you can use the extra walls to give cover to important defense buildings.

Another troop sneaky archer can attack buildings behind walls and while doing so it will stay hidden for the first three seconds. This is why our base needs to be sneaky archer-proof.

We have 3 defense buildings and a push trap that can defend our base.

Here are the stats of these defenses –

Now you can see that Archer tower has two types of settings – Long-range and Short range.

Builder Hall 2 Base Clash of Clans

At this level of builder hall, you are not going to be attacked by far away troops. Most troops will be landed just near your builder hall. Therefore it would be an intelligent move to set the archer tower to short range.

Stick archer tower near Builder hall so that it can quickly kill any sneaky archer that tries to attack builder hall.

Another new building that you will see at the builder base is the double cannon. As the name suggests it has two cannons, therefore, it has the highest damage per second of 84. Not only this but it also burst damage upon destruction.

Due to this special quality, we want it to be destroyed. It will burst damage and kill all the barbarians in range. In short, we can place double cannon in the open (but in range of builder hall) and let the opponent attack it.

Finally, we have the good old cannon. Our main motive would be to hide the cannon behind walls in such a way that it gives protection to both the archer tower and double cannon along with the builder hall. 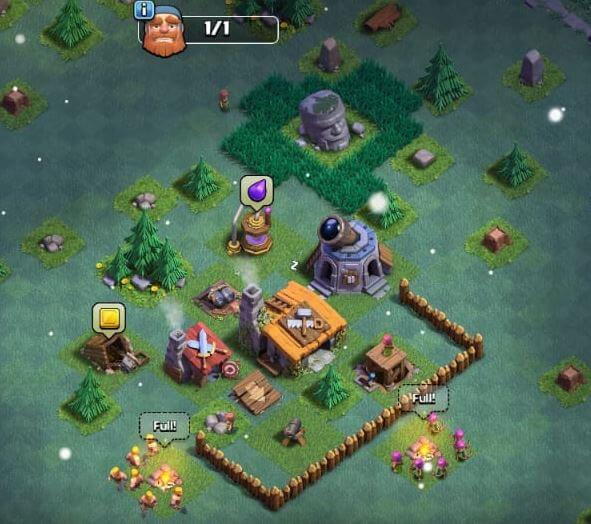 I have set up multiple bases for this purpose. After many tests and trials, I found this builder hall 2 bases to be the most effective. It is almost impossible to get 3 stars on this base.

Also Read – How to have two COC accounts?