Supercell introduced the Builder Potions in Clash of Clans March 2018 Update. Ever since then there has been a debate on whether Builder potions are worth their cost of 285 gems or is there any better way to give a boost to builders.

Here we provide you the mathematical analysis and economical value of builder potions to understand whether you should stack them or not.

What Does Builder Potion do in Clash of Clans

You might be wondering How does the builder potion work? A Builder potion is one of the magical items introduced in the clash universe. It gives a boost to home village builders as they complete 10 hours’ worth of work in one hour.

Clashers often argue that Builder potions either need to be buffed up or they need to be cost friendly as 285 gems cost is way too high then the benefit they provide. 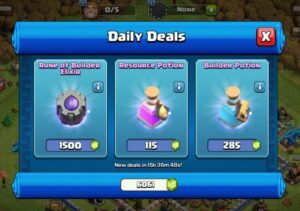 How to get Builder Potions in COC Clash of Clans

You can get builder potions in 4 ways –

From Daily Deals – Builder Potions are readily available in the daily deals section every other day. One Builder Potion costs 285 gems.

If your clan wins the clan war league then each participating member will get around 175 to 300 clan war league medals. Additionally, you can get extra 50-75 league medal bonuses. Clan leader (and co-leader) gives these bonuses to best-performing players.

This means that your overall league medals can range from anywhere between 150 to 300 medals. Thus you can buy around 10 builder potions using 300 medals.

From Events – COC is famous for introducing new qualifier challenges and missions every month. A magic item is rewarded for each Challenge completion. Several times it is Builder Potion.

From Monthly Seasons – The popularity of Clash of Clans touched new heights after it introduced monthly seasons like RPG games. Each week the season provides new challenges to players. Upon completion of every challenge, you get rewards points.

You need to achieve 2600 points to get all the rewards available in the related season. A Builder potion is one of the most common items that are among those rewards.

If you buy a gold pass then you also get a builder boost which goes up to 25% (reducing time and cost of upgrading buildings at the home village and builder base).

You also get additional builder potions in gold pass.

What happens if I use two builder potions at once

Use Rage with your Wizards and win 2x Builder Potions! This invigorating potion allows your Builders to work 10x faster in Home Village for 1 hour!

You can train Wizards and brew Rages at a 90% off during this event! pic.twitter.com/j5VEjVG7Ql

Earlier it used to give one hour at a time. But Supercell confirmed on twitter that you can use all 5 builder potions at once giving you a 50 hour speed.

Are Builder Potions Worth 285 Gems?

Let’s assume that you have all 5 builders unlocked. Now after purchasing the builder potion for 285 gems you are in short buying 45 hours’ worth of bonus time. It is equal to 1 day and 21 hours.

You will need to spend 270 gems to free one builder for the same period (i.e. 45 hours). In my opinion, it is not worth it to buy builder potions from daily deals unless you have 6 builders or you need to speed up the upgrade.

However, You can also use hammer of building on town hall to get instant upgrade.

I have found builder potions from season rewards the best trade.

You can buy a gold pass that costs less than $8 and you can earn multiple builder potions from it. Also, your builder time and upgrade cost is reduced significantly.

There are many benefits of buying gold pass in clash of clans. If you are avid COC player who also actively participate in clan games/wars then do buy gold pass to speed up your in-game progress.

How many hours does a builder potion take off?