When you check out Builder Hall 4 attack strategies you will find that there are a lot of army compositions that you can try from. But beware not every army combination is worth following.

For example, A mass raged barbarian strategy is almost undefeatable at BH2 and BH3 but when you reach BH4 this army is very much useless.

How do you attack with builder Hall 4?

The best thing about builder hall 4 is that you get to unlock your fourth army camp. This gives you the advantage of carrying a larger army.

The negative side of BH4 is that your opponent will have 75 wall pieces which means they can easily protect their Builder hall as well as defensive buildings.

This is the reason we need to devise a good attack strategy that not only brings you stars but also is easy to follow on almost any builder hall 4 base design.

Please note that you might get matched to a higher builder hall level (BH5) so we have tried to form armies that can bring stars on the higher level bases as well.

What troops should I use for Builder Hall 4?

At Builder hall 4 you will unlock two important troops – Bomber and Baby Dragon. Both these troops can play a crucial role in winning stars for you in Builder Hall 4 attacks.

Since the level of your troops will also play a major role therefore we advise you to max out your troop levels as early as possible. Do not use your builder elixir elsewhere.

As you can see a level 8 giant means that you get to take 3 boxer giants on each camp therefore upgrade it to level 8 as soon as possible. Otherwise, you will have to take just two giants to each army camp.

Now using these troops we will form armies that can bring 1 to 3 stars on any BH4 base.

What is the best attack for builder base 4? 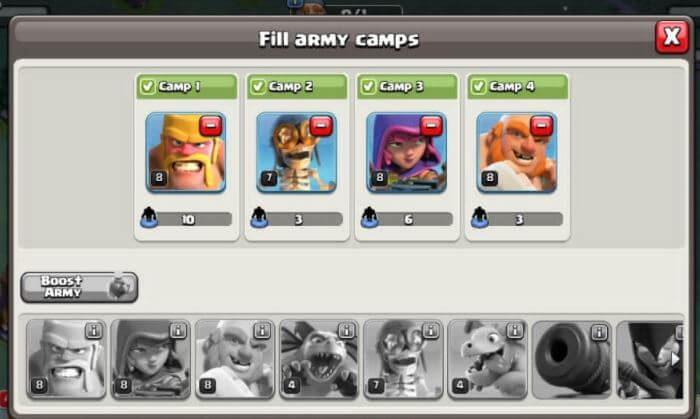 The ground units will trigger defenses like cannons, and crushers. Archer tower and hidden tesla can attack any kind of troop. The traps will also trigger on their set mechanism basis.

Most new players would be lured to air attacks as they can easily fly over walls but let me clear you that the defenses available at BH4 are capable enough to defend against any air attack.

I would advise you to go for ground units but we have included air units as well in our army compositions.

Here are five builder hall 4 armies that you can try in your attack strategies. The good thing is you can switch between these armies any time during the spectator mode. Therefore we have also included special cases where you can try a different army composition.

At BH4, you can use BARCH which is very much effective against open bases. Look for the placement of crusher on the enemy base. If it is not behind walls then use this army without any worry.

This is my favorite army which I heavily used to push trophies at builder hall 4. I touched the 2000 trophies mark by solely using this army.

The tactic is simple to follow. Your boxer giants will draw the attention of all defenses on them whereas your raged barbarians will destroy open defenses and sneaky archer will destroy crusher plus defenses hiding behind walls.

This is a special case army and you have to use it only if certain conditions are met. The first condition is that the air bombs are either in open or on the edge of the base so that these can be easily destroyed. Secondly, the base is in a rectangular shape so that a baby dragon from one side and a beta minion from the other can cover it.

You have to use your baby dragon to destroy the air bombs. Deploy your beta minion in c-shape from the far another side of the base so that they can use their long shot ability and destroy enemy camp without even triggering its defenses.

You have to deploy baby dragons far away from each other or in regular intervals so that their special ability deals more damage. Usually, I bring 1-2 stars with this tactic.

This is a well-balanced army that can be used against any BH4 base especially those that are well protected by walls.

These are the very best army compositions that you can try at Builder Hall 4. If you have any other attack strategy of your own then do let us know in the comments.